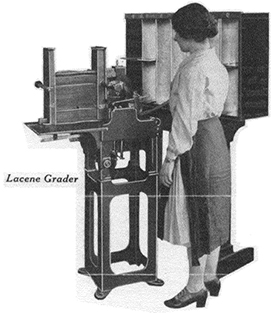 Leander A. Cogswell was born in Henniker, NH on March 4, 1864 as the middle son of three to David Warren and Eliza (Sawyer) Cogswell.  After attending local schools, he spent most of his life, starting at an early age, in the shoe business in Manchester.

During these years Leander lived in Manchester but spent every weekend at his Main Street home in Henniker.  Careful of his ease, he donated a generous sum for improving the road from Weare.  This was one of the first of his benefactions.

Among his business associates was his engineering foreman, Elmer Nichols, who - keenly alert to the needs of shoe manufacturing - invented a skiving tool satisfactorily used for trimming leather to a uniform thickness.  The two men combined to promote the productive use of the tool leasing it to other shoe factories.  Hence the evolution of the acronym LACENE from L.A. Cogswell and Elmer Nichols, engineers.  When Nichols died around 1900, Leander purchased the patent from Elmer's widow to control the lucrative business.  Thus, Leander became one of the wealthiest of Henniker citizens and a great benefactor interested in improvement of the town.

He was a lifelong resident of Henniker where he died on September 9, 1928.  His will established the Cogswell Benevolent Trust with the appointment of 3 trustees on November 6, 1929.  From that date onward, the Trust has operated and continues to operate under Leander's original wishes as expressed in his will to the present day.